The A Swing has been thoroughly tested with a wide range of players, from junior to senior and tour level to beginner. It is claimed that the results overall have been “nothing short of dramatic”.

The A Swing is predicated on four concepts: (1) a sound grip, setup, and pivot action that (2) leads to a compact, steep and efficient backswing, which (3) via a distinct transition from backswing to downswing shallows out the shaft and club into a flatter plane for a powerful impact delivery into the ball and (4) synchronicity, which unifies the previous three, as the pivot, generated from your body’s core, smoothly blends with the swinging of the arms and club, along with the actions of the hands.

The biomechanical efficiency claimed for the A Swing has been likened to a helicopter’s rotary blade (which revolves around the fixed axis of its hub). A helicopter can tilt and shift its plane without disturbing the constant rotation of its blade. Similarly, the A Swing’s set-up posture, alignment, grip and flat-arm swing/steeply set shaft backswing motion has been designed to swing in sync with the body’s stable hub-like pivoting action. It is claimed that golfers can repeat the A Swing with less need for compensatory arm and hand movements.

It places great importance on bracing the deep muscles in the trunk, from the abdomen up to the chest to unify the muscles of the shoulders, pelvis, hips and legs into a composite, but very stable, central hub around which the arms and hands can swing consistently. Its pivoting action must rotate around the body’s CoG (situated just above the naval) and does so by taking advantage of the stability the ground forces provide. It is the centripetal force of the pivoting action of the feet and body synchronized around the body’s CoG with the swinging motion of the arms and club that produces the A Swing’s power, accuracy and consistency.

It is claimed that 30% less energy is needed to complete the backswing pivot or coil than in conventional swings and that the golfer’s COG shifts 15% less than in conventional swings. This is said to (i) allow a greater storing of potential power during the backswing (ii) facilitate transition into the downswing while maintaining complete balance. Together, they result in a more efficient energy and controlled build up and application of power applied through the downswing and release into the ball.

The key to the A Swing lies in its simpler and more efficient backswing in which the hands travel 20% less in distance, while the club travels 15% farther than in a 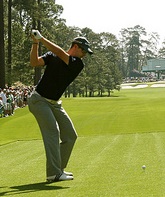 traditional backswing. The hands travel a shorter distance to the top of the backswing because they stay inside the arc of the club head’s backswing motion all the way to the top. In a conventional backswing, the club head swings back inside of the hands at some point and this change of direction increases the distance that the hands travel as well. The time and energy saved when the hands move on the most direct path to the top of the swing both allows the golfer a more leisurely transition into the downswing, and provides them with more energy that they can apply into the club, and, ultimately into the ball.

The club travels up to 15% farther because of the efficiency of the swing’s pivoting or coiling motion and also because of its extremely flexible “Prayer Grip” (a slightly strong lead-hand and weak trail-hand) which yields maximal wrist bend, but minimal rotational movement during the backswing.

When Walker Cup captain Nigel Edwards was appointed England Golf’s Director of Coaching in 2012, he  brought with him the determination to succeed that he has exhibited throughout his golfing career. He, and his team, wants to develop the next generation of elite golfers, and winning is the core of their philosophy. Everything is geared towards reducing the number of shots played on the course.

This has meant a change in culture at England Golf. The emphasis has been placed upon the creation of ‘golf athletes’. “We need to ensure a more physical approach to golf, with players becoming athletes, as opposed to golfers. In the quest for game improvement, the focus has become the driving forwards of world-class athletes.

This athleticism is creating a generation of elite young golfers, vital if England Golf is to keep up with the competition. “There’s so many people out there now, giving 100%, that if you aren’t, you’re going to fall behind,” Edwards explained. “If you can look in the mirror and say ‘I got the most out of myself today’, then you are going in the right direction.”

Pleasingly, the ladies’ game is no different, with the girls proving as eager to develop their abilities as their male counterparts and at England Golf, boys and girls are treated as equals, with girls undertaking the same performance programme, giving them the best opportunity to become elite players.

Edwards recognises the need to balance golf specific physical conditioning with technical skills coaching [which is at the heart of the Fitter Golfers philosophy] and that no matter how much time is spent in the gym or eating the correct foods, it will never be a substitute for practice. “If you are not going to practise, you can’t expect to get better… Our focus will always be on putting, short game and wedge play…enhancing young players’ talents and maximising their scoring opportunities.”

It’s a lesson that many club golfers would do well to learn from when designing their practice, as Ryan Evans, a former student, endorsed after his professional tournament debut in the Dunhill Links. He said it was ruthless accuracy around the greens which separated the elite professionals from the rest.