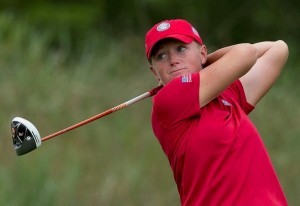 As all golfers should do, world number 3, Stacy Lewis takes good care of her back through regular stretching and strengthening exercises. However Stacy has even more reason than most. When she was eleven, a school screening exam revealed a spinal asymmetry when she bent forward. Subsequent x-rays confirmed that she had scoliosis, an excessive rotational deformity of the spine. Stacy’s spine had a 30% curvature, which meant she was forced to wear a brace 18 hours a day for the next seven and a half years until she stopped growing. Unfortunately for Stacy, when the brace was finally removed, her spinal deformity continued to worsen until, in 2003, a titanium rod and five screws were inserted in her back to straighten it. For many that would have been the end of their professional golfing dream, but Stacy is a fighter and was determined to put her back problems behind her: “I like a challenge. I’d consider myself a grinder, a fighter.”

After 3 more months back in her brace and a further 6 months of rehabilitation, Stacy began to chip and putt (which was all her doctors would allow her to do) while working out to build up her fitness. Her road to recovery was thus travelled step by step until she turned professional during the 2008 season.

The following year, while working with Joe Hallett, her coach to improve her takeaway, it became evident that a number of her ‘swing issues’ were owing to a lack of strength and stability. She had a problem keeping the trail scapular down and flat up against her back/ribcage. She also needed greater stability in both the shoulder and pelvic girdles and better trunk rotation. So fitness coach David Donatucci, from the Florida Institute of Performance at PGA National was hired to strengthen her body so she could actually make the moves she was working on. 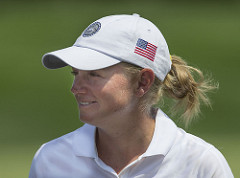 Donatucci says his role was to make her a better athlete and in turn make it easier for her coach, Joe Hallett, to make her a better player. He is convinced that golf fitness has been a vital part of Stacy’s success and it seems that Stacy would agree: “For me my fitness and my routine in the gym is as important as hitting balls and practising… Since… working with Dave, I’ve played better golf and have gotten a lot stronger. I am physically able to make moves at the golf ball that I couldn’t do before… I’ve seen success: I’m hitting the ball better, I’m hitting it further…”

Good posture is vital for efficient movement and, because of her shoulder stability issues, a lot of Stacy’s posture work had a shoulder focus. Their goal was efficiency of motion to enhance her golf swing – whether that be improved shoulder girdle stability, rotation or whatever else was needed.

Accordingly, Stacy put in a lot of work to stabilise her scapular through range of motion, because she could only begin working to generate more power (strength and speed combined) once she had attained the requisite stability.

She does a lot of exercises and drills in which the shoulders move the hands at speed. In the gym, she frequently uses a medicine ball for explosiveness. Then, when out on Tour, imitates a lot of those same exercises using resistance bands. One of her favourites is a combination row and extension, which works her back, arms, and shoulders all at once.

Stacy does a lot of resistance training on her ‘core’ – abs and back – and squats, squat jumps and lunges to strengthen her back, shoulders and legs. “I focus a lot on squats, lunges and throwing a medicine ball against the wall and the ground, since having strong legs and a solid core help me hit the ball farther.”

“Flexibility and core strength are both key to rotate through the swing properly, [so] I stretch before and after every time I play.”