Optimal physical conditioning has always been a central tenet of maximal performance in most sports, but was long overlooked in golf. Coaches have always appreciated the importance of proper swing mechanics, but they now recognize how physical attributes impact on the swing.

Those who play and teach golf finally realize the need for adequate strength, ﬂexibility, and balance training not only to optimize swing mechanics and thereby enhance golf performance, but also potentially to prevent injuries.

The programme successfully improved all ROM variables along with torso rotational strength and hip abduction strength. It also resulted in changes in swing mechanics, despite the fact that the study was conducted during the off-season, and golfers were not permitted to play golf or to practice at the driving range during their participation in the study.

The programme’s resisted movements mimicked the golf swing, and this seems to have improved the sequencing pattern of the pelvis, shoulders, and arms, resulting in greater mechanical efﬁciency in transferring power to the club and ball. 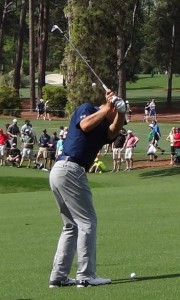 Despite an increase in static upper-torso rotation ROM, the magnitude of both upper-torso and pelvis axial rotation decreased at the top of the swing. This is attributable to increased pelvic stability (a result of increased hip and torso strength) combined with increased torso ﬂexibility. This combination of unrestricted movement of the upper torso with a more stable pelvis against which to rotate likely allowed golfers to achieve greater coiling of the body to generate more power.

The programme resulted in a 5.2% improvement in calculated club head velocity. Additionally, ball velocity, carry distance, and total distance had improvements of 5.0%, 7.7%, and 6.8%, respectively.