Back in June I penned a post entitled 'The Next Generation', in which I spoke about the relatively ailing fortunes of some of this country’s established Tour Players, such as Luke Donald and Lee Westwood, and asked if it was time for a ‘changing of the guard’. One of the ‘young pretenders’ I mentioned was the as yet little known Tom Murray, a member at Headingley Golf Club, who had just broken his home course record, carding a superb 63. I listed him as being one to keep an eye out for in the next few years.

Well another ‘young lion’ to look out for could well be 15-year-old Harry Goddard from Chesunt. The Hanbury Manor player is in the form of his life having recently carded a four-under par final round of 68 to win the North of England U16 Championship at Heswall Golf Club and consign Charlie Wilkinson (Cheshunt Park) and Archie Palmer (Bramhall GC) to share the runner’s up spot.

What I particularly liked about his win was that young Harry had to force his way back into contention after a disappointing opening round of 75 had left him 6 shots behind the early front-runner, Yorkshire's Barclay Brown, who opened with a 3-under par 69.

"I didn't get off to a great start, I went par, par, quadruple. But I didn't let it get to me, I just knuckled down to see what I could do and finished the round three-over," said Goddard. He followed that up with a much improved one-under par 71 in the second round, but still found himself six shots down on Brown.

The Cheshunt School pupil, who had watched his hero, Justin Rose, climb through the leaderboard from T11 after the first round at the recent USPGA Championship at Whistling Straits, said: "Going into the last 36 holes I just decided to see how many I could pull back. The weather wasn't great in the morning so one-over was a good score and then I played really well in the last round." 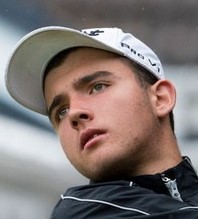 Goddard trains with the England Golf U16 squad and is coached by Rob Watts at his Performance Academy in Reading, Berkshire. To date, 2015 has been a memorable season for him. He was sixth in the South Eastern Junior Championship, T13 at the prestigious Sir Henry Cooper Junior Masters and earlier this month, he finished a hugely creditable third to Denmark’s Marcus Helligkilde in the RB German Junior Masters at Heidelberg-Lobenfeld, when he also scored 68 in the last round.

Speaking of that final round in Heidelberg, he said: "It gave me a bit more confidence to know that I could shoot that much under." So, couple that with the extra boost he will surely derive from yet another great finish, this time much closer to home in The Wirral, and what can we expect of him in the future, I wonder?

His putting stats for the four rounds at Heswall averaged out at +0.816 – which compares very favourably with PGA professional putting standards – and his sister, Lucy, herself a professional golfer attached to Hanbury Manor, commented: "That proves his putting stats are tour standard. Without a doubt he is one to watch out for. I've known it for years, since he started golf, but the stats are now proving it."