You are here:
Home / GAME IMPROVEMENT / Reduce Your Risk of Injury / Wrist Pain

Wrist pain and injury is one of the 3 most common injuries in golfers of all levels of ability. It tends to result from overuse, owing to excessive practice or play, but can also be caused by sudden trauma, or poor mechanics that place the wrists at risk. 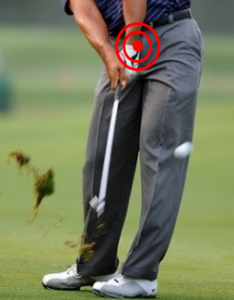 One in every four professional golfers (both male and female) has reported incidence of lead wrist injury and, statistically, it is even more common within the women’s game. The figures would suggest that if you play golf regularly over a lengthy period, it’s less a question of whether you will develop wrist pain and more a question of when.

In younger golfers wrist injuries tend to be the result of sudden trauma. They may tear, sprain, even break the wrist when hitting out of deep rough, striking a hidden tree root, or hitting a fat shot from a hard lie etc. However, golfers of any age, by playing the game on a regular basis, can acquire repetitive motion injuries like tendonitis and carpal tunnel syndrome. In older golfers, regular playing will frequently aggravate a pre-existing condition and over time can cause degenerative conditions, such as arthritis.

By far the most common wrist injury in all golfers is tendonitis. Tendons run through tight sheaths and can get trapped and irritated with repetitive strain over time. There are two main groups of tendons in your wrist: one at the rear, which straightens the wrist and fingers, and the other at the front, which flexes them. Injury and pain at the back of the wrist is more common. Most amateurs don't have the strength to lead the club into impact with a flat lead wrist and, if they happen to hit it fat, that will likely result in a sudden further flattening of the wrist angle, thus stressing the extensor tendons on the top of the wrist and causing tendinitis. 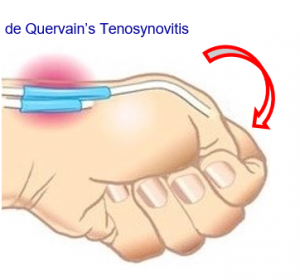 Another common type of extensor tendonitis is de Quervain’s tenosynovitis, which in golfers tends to manifest itself as inflammation of tendons at the base of the thumb. The sheath around tendon becomes inflamed and makes just gripping the club painful. The repetitive wrist flexion, extension and side-to-side movement in the swing causes the condition. It tends to occur more frequently in a golfer’s lead hand/wrist. The combination of ulnar deviation, extension and rotation of the wrist through impact while sometimes gripping the club more tightly as when playing out of thick rough, for example, can prove problematic. If your swing technique is poor or your wrist is overused, it may precipitate the condition.

If you think you might have the condition, place the thumb of the affected hand across its palm and fold your fingers down over the thumb. Then bend your wrist toward your little finger. If this causes pain on the thumb side of your wrist, you likely have de Quervain's tenosynovitis. Doing strengthening and stretching hand and wrist exercises on a regular basis will help to prevent it.

The triangular fibrocartilage complex is a ligamentous structure on the ulnar side (outside) of the wrist, important to wrist stability, which is prone to tearing owing to the degree of wrist movement that occurs in golf. Pain from a TFCC injury is only felt on the outer side of the wrist and can shoot into that side of the hand or up along the forearm towards the elbow.

Flexor carpi ulnaris and flexor carpi radialis tendinitis are found in the trail hand, arising from the wider range of flexion and extension in that hand during the swing.  Hyperextension and radial deviation of the trail wrist from ‘the top’ down into impact can cause impingement syndrome.

Extensor carpi ulnaris tendinitis is characterised by tenderness at the back of the wrist on its outer side. Symptoms are exacerbated by forced ulnar deviation and flexion of the wrist. Golfers with a tendency to ‘casting’ are at risk of developing this inflammation. [See: https://fittergolfers.com/your-swing-fault-physical-or-technical/casting/]

Typically tendonitis develops over a period of time, but it can happen quickly if you really overdo it or play without warming up properly.

Golfers can break their hamate, or wrist bone, with a "fat" shot especially in frosty weather. The butt of the golf club rests against the hook of the hamate and when the club strikes the hard ground, the force is transmitted to the bone. Although still not commonplace, a third of all hamate fractures are golf-related. To prevent this injury, the butt of the club should be of appropriate size and length, extending beyond the palm of the lead hand. If treated early, this fracture will heal in a cast, but many hamate injuries are diagnosed late and in some cases removing the bone to relieve the pain is then necessary.

Golfers are notorious for “playing through” pain to stay out on the course, but this is extremely ill-advised. It’s simply not worth the concomitant risk of causing more damage and ultimately more time spent away from the game.

Poor physical conditioning, excessive playing and/or practicing (especially when hitting balls off of artificial mats), inadequate warm-up, poor swing mechanics or technique can all increase  susceptibility to wrist injuries, which, like most other golf-related injuries, can be prevented by proper pre-season golf-specific conditioning and year-round maintenance programmes.

It’s a good idea to perform wrist conditioning exercises, because if your wrists lack the requisite strength or flexibility demanded by the swing, it will be very difficult for them to accomplish what they need to do and proper wrist action is vital, since the hands and wrists provide the body's only connection to the club. The wrists not only control the club throughout the golf swing, keeping it on plane, maintaining proper face alignment, creating lag and so on, but the unhinging of the wrists through impact is also key in providing power. Without strengthening the wrists and forearms certain shots, like the "Stinger", or hitting out of deep rough become much more problematic.

Players with weak wrists often grip the club too tightly, tense their wrists and extend the lead wrist in the backswing. This closes the clubface and importantly restricts wrist mobility in the downswing, dramatically reducing lag. The wrist position at impact is crucial in generating the right clubface angles for maximising distance. If the lead wrist is weak (or technique is poor) it will tend to be overpowered by the trail hand and collapse or break down through impact, which leaks both distance and accuracy. 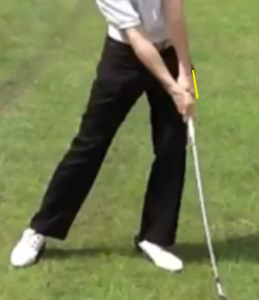 As mentioned earlier, most amateurs don't have the strength to lead the club into impact with a flat lead wrist, as they've been taught to do, and that creates overload. In an effort to achieve this flat wrist position, they weaken their grip which not only decreases their control of the club, but also increases the risk of a bowed lead wrist at impact and injury to the wrist extensors. Sometimes this is compounded by hitting fat shots, which further flattens the wrist angle, stressing the extensor tendons on the top of the wrist and causing tendinitis. Actually strengthening the grip a fraction helps to create the very slight ‘neutral’ cup in the wrist (as is created by the act of forming a fist) that you want for power and control at impact. A typical way higher handicap players try to hit a ball harder is to snap their wrists at the bottom of their swing. Although it may feel powerful, relative to a free roll-release, this action actually decelerates the club head and continual repetition can cause tendonitis.

In summary, the incidence of wrist pain and injury is so prevalent in golf because the swing makes huge demands of the wrists: they must be very flexible in order to flex/extend, abduct/adduct and rotate freely, but also have the requisite strength to keep the clubhead under total control and, when necessary, power it through deep, clinging rough with minimal clubface rotation. A failure to condition the wrists appropriately will almost inevitably place them at increased risk of overload and eventual injury.