As Darren Clarke is named as captain of Europe’s 2016 EurAsia Cup team, the whole question of Asian golf enters the spotlight once again, especially given that Clarke will also captain Team Europe in next year’s Ryder Cup.

The EurAsia Cup will take place at Kuala Lumpur's Glenmarie Golf and Country Club on 15-17 January and will provide Clarke with a useful ‘dry run’ as a team captain and the chance to try out a few ideas ahead of next September's Ryder Cup at Hazeltine National Golf Club in Chaska, Minnesota.

In the only previous competition back, in 2014, the two teams fought out a nail-biting 10-10 draw and Clarke commented, "Both teams that are assembled will be desperate to win the EurAsia Cup for the first time."

However, putting all the expected niceties aside for a moment, we are left to ponder the question: what kind of team will Europe assemble? With no disrespect intended, a comparison of the respective 2014 EurAsia and Ryder Cup teams suggests that last time around the European Tour attached more importance to the latter. 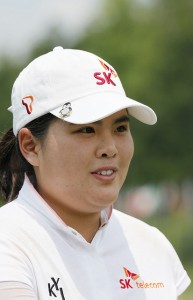 Even more pertinent then is the question why is there not a similar competition for the women? Inbee Park’s clear win by three shots at the Ricoh Women’s British Open in August this year confirmed her as the world’s top female player. The fact that the top three places all went to Asian golfers served further to highlight current Asian dominance of the Ladies game.

A look at the current women’s world rankings is hugely revealing. There are ten Asian golfers in the top twenty and no less than twenty-five in the top fifty! So, how is the women's game reacting to this situation? Laggardly, at best. When, a couple of years ago, a fifth major was added to the calendar, it would hardly have been a surprise had the authorities seen fit to stage it somewhere like Nine Bridges GC, or the Jack Nicklaus, Korea or Hirono GC, or Tokyo GC in Japan. It’s not as if suitable venues don’t exist!

Instead they chose to upgrade the Evian Championship – another European venue (which was, incidentally, dominated by Asian players once again in both 2014 and 2015 – as if to underline my point!). The decision, many would say inadvisedly, flew in the face of current developments in the world game.

If there is a place for the EurAsia Cup in the men’s game, given the world rankings a women’s version would be a more prestigious affair. The Solheim Cup showcases women’s golf in its most exciting format and no-one would want to see that disappear, but in non-Solheim years, there would surely be a market for another intercontinental contest that included Asia.

If congestion is an issue, then Europe and America could conceivably alternate as Asia’s opponents.

Any further exposure for the ladies' game is surely to be applauded and could only help the attempts being made by the UK authorities to attract more girls to the game.

As history tells us, in any sport success is cyclical and that only serves to exacerbate the need for prompt action. Current Asian dominance provides a window of opportunity that the game’s governing bodies would be foolish to let pass by.