Beach golf was created in Pescara, Italy in 1999 by Mauro De Marco. It is a stroke-play competition held over two rounds and played on crowded beaches during the summer. The game takes place along a designated stretch of sandy coastline approximately 2km in length, between teams of two players (one with a low-handicap and the other a high-handicap). Each team’s handicap is determined by dividing the sum of the two players’ handicaps in half and rounding down if necessary. The challenge is to complete the hole with the fewest possible strokes.

It’s the only sport in the world where spectators are on the pitch and ‘involved’ in the game. Objects like windbreaks, beach umbrellas and sunbathers are incorporated into the game and treated as hazards – just like bunkers, trees and lakes in the traditional form of the game. The players use standard golf clubs, but, because the event takes place in a crowded location, the ball that is used from tee to green is made of soft polyurethane foam, or a soft rubber, in order to prevent injury to anyone who is accidentally hit during the game. However it is replaced with a regular golf ball once competitors reach the green itself. There is no time limit. Players have the opportunity to stop to have a lunch break, however, teams must respect the assigned starting time.

The starting area consists of a synthetic rug that is one and a half metres square. The ‘honour’ is given to the lower handicap player, who tees off first from an appropriate tee, which can be positioned to best advantage anywhere on the mat. Each team starts three minutes after the previous one. The maximum delay allowed is ten minutes after the departure of the previous team. Any team who contravenes this three minute rule starts with a penalty of five shots. 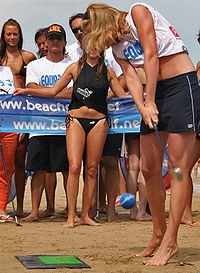 Caddies are also employed, but with a difference! Caddy Girls act both as game-judges and hostesses during the event. They are there to make sure that the players conform to the rules, but another of their roles is to ensure everyone’s safety, which they do by holding a ‘protection belt’ around the area of action, thus allowing golfers to play unimpeded by bathers, beach chairs and umbrellas on the ‘course’.

The game, developed by the Beach Golf Sport Association, has grown in popularity and is now recognized by both the National Educational Sports Centre and the Italian National Olympic Committee.

Annual tours are conducted during the summer on the beaches of the Italian coast. The tour of 2010, in collaboration with the University of Urbino, was 30 consecutive days of events along the Adriatic coast.