You are here:
Home / Your Swing Fault: Physical or Technical? / Casting

All golfers seek a penetrating ball trajectory with great carry and roll out. They want to hit the ball consistently with a combination of power and accuracy. So, we are publishing a new series of posts in which we will be identifying the likely physical ‘root causes’ behind swing patterns responsible for common ball flight issues that plague club golfers. We begin with a look at the unwanted, weak, high ball flight caused by ‘casting’ the clubhead early in the downswing.

during the downswing. In effect the club is released far too early, so that the shaft and lead forearm form a straight line way before the point of contact with the ball. The result is a weak impact position, by which time the lead wrist has often broken down – having been overpowered by the trail wrist’s flexion – and become slightly ‘cupped’. Instead of the hands leading the clubhead through impact, the opposite happens. Instead of the desired forward shaft lean, the shaft is in fact angled backward, thus adding loft to the face and causing a loss of both power and consistency.

Ideally, in transition (as the lower body begins its move back toward the target even as the arms are continuing to lift to their top of the backswing position), if the wrists are both ‘soft’ and flexible, the extension of the trail wrist actually increases (folds back on itself even more). The angle created by the forearms and the shaft of the club actually becomes more acute, thereby creating what is known as lag – a delayed, rather than an early, release of the club. 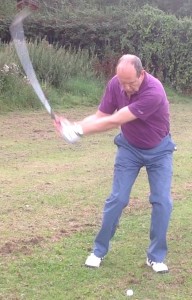 Let’s begin by addressing the more obvious physical requirements – i.e. in the wrists and forearms. Unless a golfer possesses a high degree of wrist flexibility he/she is never going to replicate the transition move described above. They will simply be unable to store lag correctly in the downswing for a consistent, optimally powerful strike. Both wrists must be able to move freely through their full ROM. Especially they must have ample ability both to extend/flex and adduct/abduct. In addition to these fundamentals, forearm and grip strength is important in order to ‘set’ and ‘hold’ the club properly.

Ok, no great surprises so far. However, what is perhaps less widely appreciated is the fact that dysfunction in the lower body can also be a root cause. You see, if the lower body is incapable of initiating the correct sequence of power from the ground up (i.e. through the ankles, knees and hips) the upper body will inevitably try to compensate. In other words, a shortfall in ankle and/or hip mobility and a lack of strength in the muscles responsible for stabilizing the core can often be traced back and identified as the root cause of the ‘casting’ problem. Equally, a lack of rotational capacity in the thoracic spine (upper back) will mean that the arms are forced to compensate. They will tend to work independently of the trunk and elevate prematurely in the backswing, which means that, in consequence, they will also release too early in the downswing, once again causing a problem with ‘casting’.

The sedentary nature of most modern lifestyles means that the vast majority of club golfers have physical limitations when it comes to golf fitness and, as we’ve just seen, these limitations are often the root cause of technical swing issues. Therefore, if you tend to cast the club, it might well be advisable to use Fitter Golfers’ free-to-download self-assessment screening programmes to screen your body for any of the physical limitations mentioned above. If you find evidence of any shortfall you should then embark on a targeted golf specific conditioning programme.

Until your body will permit you to adopt the correct sequencing and swing positions, there is little point in trying to address the problem from a technical perspective. Always fix any physical issues FIRST.