You are here:
Home / Your Swing Fault: Physical or Technical? / Chicken Winging

All golfers seek a penetrating ball trajectory with great carry and roll out. So, we began our new series identifying possible golf fitness factors behind the swing path and ball flight problems that plague club golfers, with a look at the high, weak flight pattern associated with ‘casting’ the club early in the downswing. Today’s we look at a closely related issue – that of ‘chicken winging’. 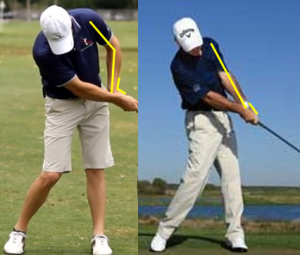 What is 'Chicken Winging'?

What we are describing when we talk about ‘chicken winging’ is a loss of lead elbow extension through the impact zone. This is bad news for two reasons: (i) it makes it very difficult to develop real speed or power through the ball and tends to result in a high ball flight that lacks penetration and distance (ii) it exerts excessive force on the outer side of that elbow joint and, over time, can cause injury (typically ‘tennis elbow’).

The problem can be caused by a physical restriction, by improper swing technique, or, if you are really unlucky a combination of the two!

Let’s deal with the technical issues first: if the downswing sequence is not initiated correctly by the lower body and the lead hip is not ‘cleared’ for the arms to swing unimpeded through the impact zone and on into the follow-through, then more than likely the arms will arrive at impact following an over-the-top path where their passage will be to some degree ‘blocked’ by the torso’s tardy rotation. In such cases the lead elbow will more often than not break down and ‘chicken wing’ owing to the direction of the forces being exerted upon it. Equally, if the trail arm/wrist overpowers its lead side counterparts (this applies principally to a trail side ‘hitter’ rather than a lead side ‘swinger’) then a ‘chicken wing’ can often be the end result.

Now for the most likely physical issues:
A shortfall in ankle and/or hip mobility, or indeed insufficient gluteal strength (especially in the lead side) may well be responsible for problems with clearing that lead side for a free roll-release with the arms and hands.

Equally, if a golfer has limited stability and mobility in the lead shoulder region – and especially if their rotator cuff musculature is not flexible enough to rotate the lead arm’s humerus externally through its full range of motion within the glenoid (socket) – then once again the lead elbow will, quite literally, be forced to flex into its ‘chicken wing’ position.

Finally, it is worth mentioning that a COMBINATION of good lead arm/wrist strength and lead side shoulder flexibility are essential for a strong, fully extended lead arm and ‘flat’ lead wrist at impact.

What Should I Be Doing About It?

The sedentary nature of most modern lifestyles means that the vast majority of club golfers have physical limitations when it comes to golf fitness and, as we’ve just seen, these limitations are often the root cause of technical swing issues. Therefore, if you have a tendency to 'chicken wing', it might well be advisable to use Fitter Golfers’ free-to-download self-assessment screening programmes to screen your body for any of the physical limitations mentioned above. If you find evidence of any shortfall you should then embark on a targeted golf specific conditioning programme.

Remember, until your body will permit you to adopt the correct sequencing and swing positions, there is little point in trying to address the problem from a technical perspective. Always fix any physical issues FIRST.