You are here:
Home / Your Swing Fault: Physical or Technical? / Early Extension

What Is Early Extension? 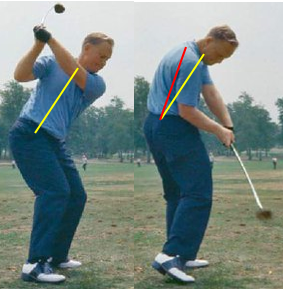 loss of posture or spine angle) refers to changes in the body’s set-up angles at some point in the swing – when it occurs in the downswing it is often referred to as early extension and ‘coming up out of the shot’. The hips and spine go into extension or straighten up too early on the downswing, moving the hips and pelvis closer to the ball. It often leads players to complain that their arms get ‘stuck’ or ‘trapped’ in the downswing and, because it shifts the body’s centre of gravity, it impairs balance and stability, which, in turn, can disrupt rhythm and timing.

As a consequence, early extension can be responsible for a number of mishits – most typically a ‘blocked’ push shot and, because the change of spine angle means the golfer is forced to manipulate the clubface with the hands to square it through impact, if mistimed it can also result in a wild slice or hook shot, so the potential for significant shot dispersal is extremely high. Equally, if the golfer does nothing with their hands through impact, they may actually shank shots because they are closer to the ball at impact than they were at address. As if all this were not enough, since it alters the arc of the clubhead it can frequently cause ‘thin’ strikes and ‘topped’ shots too!

Two-thirds of amateur golfers have a problem with early extension and our sedentary modern lifestyles are principally to blame. Sitting at a desk for long periods means that the muscles in the front of the body - especially the hip flexors and quadriceps become used to being in a contracted position. The posterior chain – so important in the golf swing is being continuously weakened, because the entire the posterior side of your body is being stretched. You're not using the muscles in sides of your hips, your glutes, or your hamstrings and the lateral hip and thigh muscles along with the glutes have a vital role to play if a golfer is to maintain his spine angle throughout the swing. Poor internal rotation of the lead hip is a major physical cause of early extension. The pelvis must be able to rotate without forward movement toward the ball. If the pelvis is unable to rotate freely around the lead hip owing to muscular tightness then forward or lateral movement will be the inevitable result.

An instructor may well point to the fact that a golfer is not rotating their hips enough and taking the club back too far inside with their arms in the backswing and/or sliding their hips excessively in the downswing, causing an excessively inside attack on the ball. Either of these “technical” issues will likely result in the golfer having to stand up in the downswing to make room for their arms. However until the golfer addresses the physical restrictions that are causing these movement patterns, no amount of coaching will eradicate the swing flaws.
Equally the instructor may look to address a rushed transition and too early pivot that gets the golfer out of sequence and once again means that the arms get stuck behind leaving little option but early extension and flipping with the hands. Again coaching will prove futile if adequate separation of the upper and lower body proves to be physically impossible. Until the restricted thoracic mobility and lack of flexibility in the latissimus dorsii muscles is rectified improvement will prove elusive.
Finally insufficient gluteal and abdominal strength make it impossible to achieve a stable platform and a stable, neutral pelvic posture is needed to help prevent the lower body from thrusting forward during the swing and causing early extension.

By way of summary, an anterior/posterior imbalance in the musculature of the lower body - generally a lack of anterior flexibility – is present in the vast majority of golfers and it is frequently what forces a player to come up out of the shot during the swing. Without the proper balance between opposing muscle groups like the quadriceps and hamstrings, the golfer has little or no chance of maintaining the correct angles throughout the swing. No matter how much time you spend practicing technique, if the muscles don't work as they should, neither will your swing.

What You Can Do To Fix It

It is always well worth downloading our 2 FREE self-assessment screening videos to check whether or not you have any physical restrictions that might be adversely impacting on your swing. They cost you nothing and may highlight golf fitness issues that, once fixed, will transform your game. If  our screening videos flag up a problem, then simply select the appropriate module(s) from our comprehensive Foundation Level Conditioning Programme and get to work on curing your early extension problem!