You are here:
Home / Your Swing Fault: Physical or Technical? / Hitting it Fat or Thin

Mid- to high-handicap golfers on average hit 4 GIR per round, with quite a high proportion of their misses being the result of either hitting it fat or thin.

As with all swing faults, the problem is caused by incorrect technique, but the issue that always needs to be addressed first is whether or not that flawed technique is owing to a lack of golf fitness.

Possible Causes of Hitting it Fat or Thin 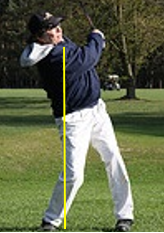 A golfer seeking to correct problems with hitting it fat or thin should first identify the exact source(s) of the problem and ascertain, via screening, whether they are caused by physical restriction(s). 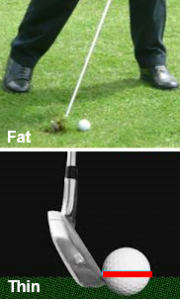 It’s not only a full range of thoracic and hip rotation that is vital for the requisite separation and sequencing of the downswing. If you want to optimise correct weight transfer and movement sequencing in your swing, you need to ensure that you have good posture, without excessive forward pelvic tilt, at address; you have a strong core and a well-balanced anterior/posterior musculature; an excellent range of rotational movement in the upper back, good levels of flexibility in your lats; an excellent range of internal hip rotation in combination with strong adductors and abductors; and last, but by no means least, strong glutes (especially the glute medius).The problem is often caused by hanging back and failing to transfer weight. Hitting off the trail leg, with the clubhead rising instead of descending into impact, means it will either hit the ground first (fat) or, if it misses the ground, inevitably to make contact around, or even above, the ball’s equator, thus topping it, or hitting it thin. So, essentially, fat and thin shots are caused by the same problem of the swing arc bottoming out behind the ball. To discover the possible physical causes of a tendency to hang back click on the following link: https://fittergolfers.com/?page_id=1499

Hitting it fat or thin can both be the result of a golfer deliberately trying to imitate the pros ‘squat’ move in transition. What can happen is that they ‘squat’, but they fail to ‘square’. They drop down without a proper lateral weight shift into the lead side. They cannot then post up through the lead leg, which, along with a correct weight shift into the lead side, has the effect of preventing the swing arc from bottoming put before the ball. Without this, they are pretty much doomed to hitting it fat.  [As an aside, it’s interesting to note that Jack Nicklaus used to start with the club slightly off the ground, because he knew that the momentum of the swing would pull the club down to the ball. He felt that starting with the club on the ground was setting up for a fat shot.]

Another way golfers achieve the same end result is by prematurely releasing their angles and ‘casting’ the clubhead, which also drops the low point of the swing behind the ball. Consequently, once again, either the clubhead catches the ground first and hits the ball ‘fat’, or, in an effort to save the shot, the golfer shortens his/her arms to avoid the ground and ends up hitting it thin.

To discover the possible physical causes of a tendency to ‘cast’ the club, click on this link: https://fittergolfers.com/?page_id=1509

Yet another possible cause is if the swing is out of sync, owing to an overactive lower body. Then the golfer tends to feel that he/she is late with the hands and so releases the club in an effort to catch up and as a consequence will, more often than not, end up hitting it fat. This frequently happens when higher handicap players try to hit the ball hard with the longer clubs.

The “late” hit can also be the result of the upper body ‘getting ahead’, in other words moving laterally toward the target at the start of the downswing before the arms have dropped onto a lower plane. When that happens the golfer rarely gets to the bottom of the ball. As mentioned previously, the reaction to getting ahead is to try to throw the club at the ball in a last ditch effort to get the arms extended.

Excessive sway forces weight onto the outside of the trail foot ‘at the top’ and makes it very difficult to achieve proper weight shift, because there is no stable platform from which to drive weight during transition. Poor hip mobility is not the sole cause of this particular lateral sliding problem. The ability to stabilize your trail leg, prevent lateral sway and effect proper weight shift during the backswing and transition into the downswing demands high levels of muscle strength in the legs and glutes – especially in the glute medius, which works to prevent the trail hip from rising or shifting laterally during ‘loading’. In the most extreme cases, significant weakness in the trailside glutes, adductors and abdominals prohibits proper weight shift altogether, but since the vast majority of amateur golfers have weak glutes, it stands to reason that their capacity for optimal weight transfer is, at best, inhibited. 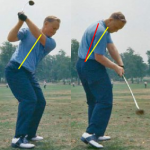 Another common cause of ‘thinning it’ is a loss of spine angle and ‘coming up out of the shot’. A posture that is too bent over, which positions the bodies COG too far forward can cause golfers to “bail out” at impact in a desperate effort not to lose balance.

Sitting at a desk for long periods, as so many of us have to do at work, means that the muscles in the front of the body - especially the hip flexors and quadriceps become used to being in a contracted position. The posterior chain – so important in the golf swing is being continuously weakened, because the entire the posterior side of your body is being stretched. You're not using the muscles in sides of your hips, your glutes, or your hamstrings and the lateral hip and thigh muscles along with the glutes have a vital role to play if a golfer is to maintain his spine angle throughout the swing. Poor internal rotation of the lead hip is a major physical cause of early extension.  The pelvis must be able to rotate without forward movement toward the ball. If the pelvis is unable to rotate freely around the lead hip owing to muscular tightness then forward or lateral movement will be the inevitable result. 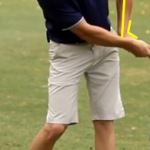 Yet another is the “chicken wing”. Ideally, the lead arm should be fully extended at impact, but many amateurs flex their lead elbow to avoid hitting the ground, a compensatory move made necessary by an excessively steep plane or angle of attack. For physical causes of the chicken wing fault, follow the link below: